Glorious thread on typewriters and their masters

From Dean Frey, posting on Twitter as “Deny Fear @dean_frey.”

Frey posted this wonderful picture of Rachel Carson, taken by Erich Hartmann in 1962 (after publication of Silent Spring?) 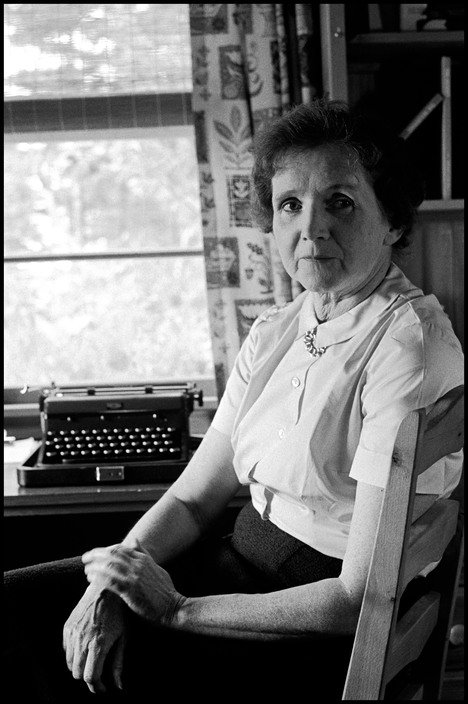 Rachel Carson and her typewriter, by Erich Hartmann, 1962.

But hold your horses. Frey posted a raft of other artists with their machines. What a glorious little thread!

A great article by @MargaretAtwood on learning to type.https://t.co/HZNWNDRsHR
Time for a #typewriter thread, I think
Atwood writing The Handmaid’s Tale, Berlin, 1984
Photo: Isolde Ohlbaum@holdengraber pic.twitter.com/0qmGjYeaEC

I just sit at my typewriter and curse a bit.
– P. G. Wodehouse
📷 Michael Brennan, 1974 pic.twitter.com/Z1tfVEzMl7

We are great writers on the same dreadful typewriter
– Allen Ginsberg
Louis Armstrong at his Corona.
Dennis Stock, 1958 pic.twitter.com/kRUBKv09gB

I like the sound a typewriter makes.
– Paul Auster
Auster's 2002 book The Story of My Typewriter (with Sam Messer) is indispensible.https://t.co/XDvve3DR5l pic.twitter.com/9CHjp7rMgQ

Geoff Dyer with his Olympia on the roof of Crownstone Court, Brixton, 1988#Typewriter
Listen to his #PhoneCallFromPaul – this is one of my favourites:https://t.co/STXxHv5vgp @Lithub pic.twitter.com/lZiFtBX6FK

And our own lovely old Underwood… pic.twitter.com/3f76Do0YRw

You have seen some of those photos, some of those artists, and some of those typewriters in other posts at Millard Fillmore’s Bathtub. There are some sparkling photos there I had not seen before.

Did anybody celebrate North Carolina statehood?

U.S. flag flew in at least one spot in North Carolina on statehood day, November 21, 2017. Photo at Chimney Rock State Park, outside of Asheville, North Carolina, near U.S. Highway 64/74A, on the Rocky Broad River. History.com image.

Staff at Millard Fillmore’s Bathtub do not always stay ahead of flag flying days. November 21 is North Carolina’s statehood day, and MFB missed noting that earlier.

Newspapers, television and radio, and other media did not note any celebration, if it occurred. Do North Carolinians fly their U.S. flags on November 21, for statehood day?

If you’re in North Carolina, did you fly your flag on Statehood Day?

Happy Statehood Day to North Carolina, also known as the Tar Heel state. North Carolina was the 12th state to join the United States on the 21st of November 1789. pic.twitter.com/mMceRMSd4l

At @BRCmagazine I wrote about statehood movements from 1770s to 1790s in Kentucky, North Carolina, WV & Pennsylvania https://t.co/7hdE09MmP4

Happy Statehood Day, North Carolina! Here is our preliminary chart of your coast, from 1856. https://t.co/kPaPBFyhh7 pic.twitter.com/7FBAUwcMoj

Today is the 226th year of statehood for North Carolina. Hooray for the best state in the country! #NorthCarolina #NC