What ARE these Christians advertising? 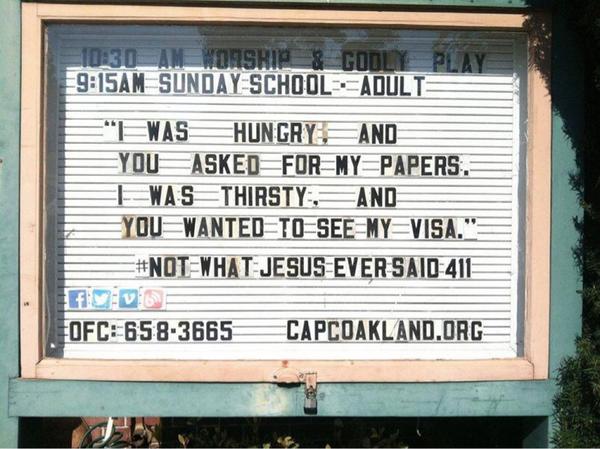 Not your usual bon mot from a church sign; probably from College Avenue Presbyterian Church in Oakland, California

Some Christians take the Gospels seriously, even in those scriptures not exactly found in the New Testament, it would appear.  Would that others follow.

Some students really struggle with the idea of the role of religion in the founding and settling of America. Among interesting misconceptions I’ve run into in the past 18 months: Spanish settlers of Texas were Baptists (since so many Texans are Baptist today); the religious fights in England leading to the English Bill of Rights was between “Christians and others.”

I’m not sure Outreach Magazine’s list of the top 100 church congregations in the U.S., by size, would do anything to disabuse students of any of their misconceptions. Do we adequately teach about the role of religion in U.S. history? Why are so many students so ill informed? Can these churches help out?

By the way: Spanish settlers of Texas were Catholic; the religious fights in England tended to be between Catholics and Anglicans, both considered Christian sects, to the surprise of too many students. Oy.