No, November is not Muslim Appreciation Month; it’s America is Gullible Month, and you’ve been nominated Grand Marshal of the parade

Some people used to get suckered periodically by headlines in The Onion, before most people figured out it was a publication full of parodies.

But the along came The Courant; not everyone got that one yet.

Then there’s National Report.  Even fewer have it figured out.

So, there was uproar on Facebook, on Twitter, and probably on your e-mail, earlier this evening when this story gushed all over unwitting computer-screen gazers.

Washington, DC — President Barack Obama held a press conference to announce that he is declaring the month of November ‘National Muslim Appreciation Month’.

“The Muslim community deserves our full acceptance and respect,” Obama told reporters. “We have killed millions of Muslims overseas since the September 11th attacks. They are not all bad. In fact most of them are good. So from now on, November will be a month to celebrate the Muslim community, the Sunnah and the Quran.”

Khaled Matei who is a member of the Muslim Brotherhood‘s Freedom and Justice Party told CNN he is pleased with Obama and his actions. “I spoke with President Obama by telephone yesterday and personally thanked him for what he is doing for the Muslim community,” Matei said. “This is definitely a step in the right direction I explained to him. Praise Allah.”

Obama informed reporters about his future plans for helping Muslims around the world. “I will be working with Congress in making it easier for Muslims to earn a Green Card and achieve American citizenship,” Obama said. “Currently as it stands, obtaining a Visa or Green Card for a Muslim is very difficult. There are too many background checks in place and I plan to fix that.” Obama continued, “Muslims are hardworking people who are just looking to live the American Dream like the rest of us. Mr. Matei of the Muslim Brotherhood assured me they want to come to this country to help us, not harm us.”

Obama finished the press conference by explaining to reporters how happy he is with America. “Folks, there is no way we could have had a ‘National Muslim Appreciation Month’ 20 years ago. That really says a lot about the growth and progress of this great country.”

And, just to make sure you know this journal has trustworthy reporters, they post the bio at the bottom of each story.

Mr. Horner has won numerous awards for journalism including a Peabody Award and a Pulitzer Prize. He was recently in the media for his heroics in stopping a robbery by quoting Pulp Fiction.
View all posts by Paul Horner →

Must be true, no?

Look, if your Hemingway Brand™ solid gold Sh** Detector didn’t start clanging at the headline, you need new batteries — maybe better get the thing calibrated, too.

Should we count the ways it’s a hoax?

I got suckered by a story in National Report a couple of months ago.  When you name your blog after one of the most famous hoaxes in history, you really need to be careful.  So I was suspicious from the start.

But it got picked up by GOP – The Daily Dose? That’s legitimate sounding enough to gullible Obama H8ers that I suspect they didn’t even pause.  Cleverly, Daily Dose listed the story as “via NRO,” the acronym for National Review Online — but of course, that’s not correct.

Then the Dominoes of Gullibility started to fall; among those suckered:

Obama Declared November Muslim Appreciation Month. We The People Undeclare that and Raise You a Revolution. pic.twitter.com/BVMIEQUDbr

Wow.  How many people got suckered by that hoax?  Were you among them?

Cartoon by Jeff Danziger, in the NationalMemo, and other New York Times Syndicate clients.

Jeff Danziger drew cartoons for the Christian Science Monitor when I discovered him.  He’s moved from there (as has a lot of the good stuff that used to show up in the print editions, especially since it’s gone to electronic daily publication).  But his style is cool, to me, and he’s spot on here.

I don’t think he’s a Texan.  Here he captures small-town Texas well, with an especially nice flourish in the Shiner ad on the pool table light.

Is this right?  He’s been nominated for a Pulitzer, but never got the award?

Two presidents, a study in blue 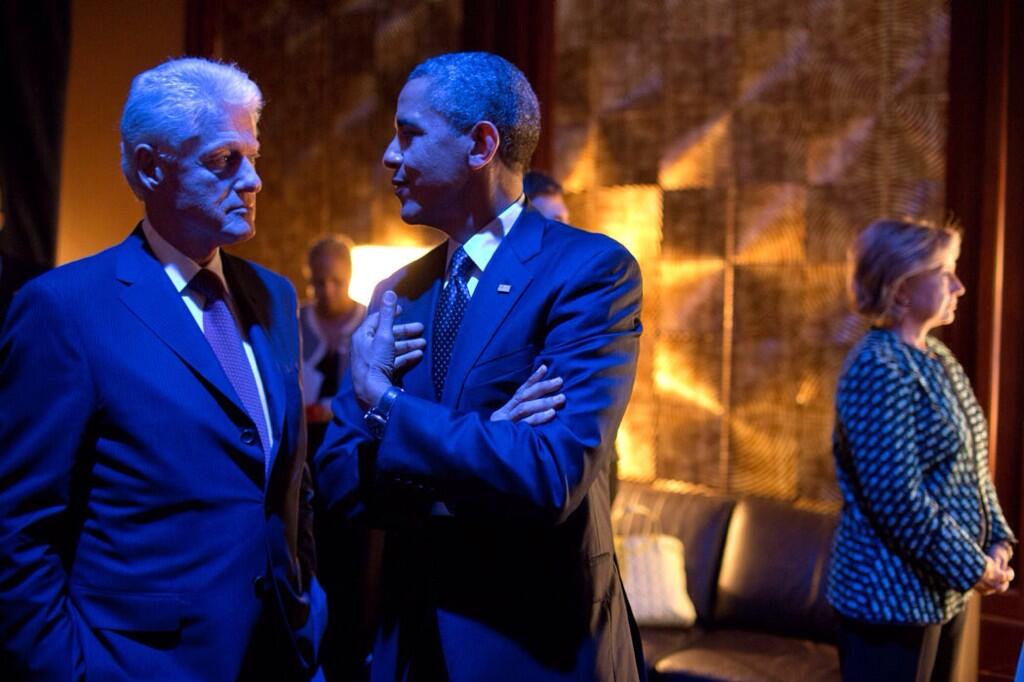 Pete Souza’s work as White House photographer continues to fascinate me.  He’s got more opportunity than most of us have to get great shots — but he’s also got a keen eye for a good story-telling photo, and a good eye for great photo composition on the fly.

In this photo, Souza captures two presidents lost in conversation, bathed in blue stage lights, awaiting their time on the stage; but next up is Hillary Clinton, who will introduce them.  Mrs. Clinton awaits her cue.  The presidents met at the annual meetings for the Clinton Global Initiative.

Hold on to this photo; depending on events of 2016, it may yet have many more stories to tell.