Time for a nice, cold glass of Dunning-Kruger 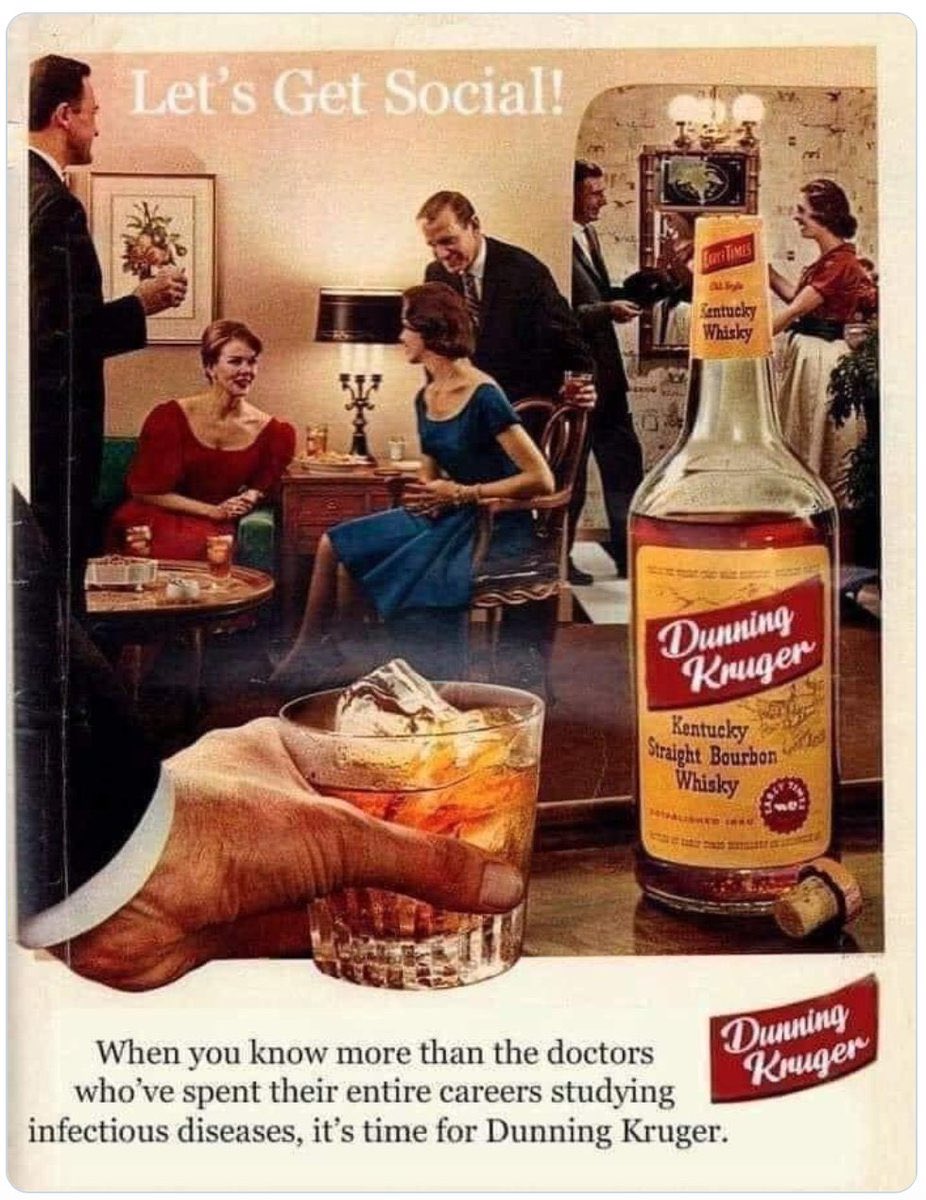 “When you know more than the doctors who’ve spent their entire careers studying infectious diseases, it’s time for a Dunning-Kruger.”

I wish there were a requirement for inventors of internet memes to sign their work. Who gets credit for this whisky advertising mashup?

Tip of the old scrub brush to Nish Gandhi, DO @supreme_doc.

Something to toot your horn about: Scouts save Bugling merit badge

Recently Bugling was dropped as a separate badge, and made an adjunct of the Music merit badge.  Bugling was a great tradition in Scouts — a music-oriented badge that required only that one be able to memorize and blow recognizable versions of several bugle calls.

Perhaps ironically, Bugling also drew the spotlight as the last merit badge earned by several of those super Scouts who earned every possible merit badge.  For some reason, learning to blow the horn was just the last or toughest thing they could master.

Good news:  Bugling has been reinstated.

Have your guys start practicing “Taps,” because Bugling is here to stay.

In early June, we reported that the Bugling merit badge was to be discontinued and its requirements merged into Music merit badge.

That’s no longer the case. Responding to concerns from hundreds of Scouters, the BSA’s Youth Development team has decided to reinstate Bugling as a separate merit badge.

Oddly enough, this means that Bugling will never have officially been part of Music merit badge, because the changes were never reflected in a Boy Scout Requirements book.

Bugling and Music will continue to share a merit badge pamphlet. Requirements and information for both of the badges will be contained within that single booklet.

"To the Colors," one of the bugle calls required for the Bugling merit badge. Image from U.S. Scouting Service Project

Cody Evans confessed that Bugling was the toughest merit badge he had to earn, but unlike others in the recent past, he didn’t put it off to be the last one.  Congratulations to another member of the 121 Merit Badge Club.

From the Frederick, Maryland, Gazette:

The 17-year-old Gov. Thomas Johnson High School junior recently was awarded the last of the 121 obtainable merit badges in Boy Scouts of America in March, an accomplishment that the organization deems almost unattainable.

Evans, who belongs to the Troop 1998 based out of the Elks Lodge in Frederick, said that though he had been involved in scouting for seven years, it was only in the last two that he realized that he was close to doing what very few scouts do in their Boy Scout careers. Realizing how close he was to getting the last badge, he became more motivated.

“I never thought I had much time to earn them all until I got just over halfway there,” Evans said. “I thought, ‘I have a chance, why not just go for it.’ So, I started working hard to earn them all.”

Evans has spent the last seven years learning to do everything from practicing veterinary medicine to driving a motorboat, even bugling, a skill he never anticipated having under his belt.

“That was the hardest because I didn’t know how to play at all before,” Evans said.

On March 14, Evans earned his last badge in energy. To complete the badge requirements, he had to build two projects that represented different forms of energy, which he demonstrated by building a slingshot and a sailboat.

Evans had little words when asked how it felt to have such a big accomplishment.

“I was overwhelmed,” he said. “Just happy that I was able to reach my goal.”

But, he said that the badge requirements have made him a more well-rounded person and student, provided him valuable leadership skills, and he hopes it will reflect well on his resume when he applies for college. Evans is a National Honor Society member and vice president of the Student Government Association at TJ High.

Despite achieving the highest of Boy Scout honors, Evans said he still has more goals in the organization. He said that he will apply to become an assistant scout master for his troop and help other scouts achieve their goals in the program.

When asked what advice he would give to other scouts in Frederick, Evans said: “Set short goals, and start trying to knock a little off at a time when you can.”

Another Scout joined the exclusive club of those who earned all the possible merit badges.

Wes Weaver, already an Eagle Scout, added the last of his merit badges late last month, according to KXII Channel 12 in Sherman, Texas (covering the border area around Lake Texoma).

But Weaver’s accomplishments don’t end with badges. The teen also earned his Eagle Scout award by building a 112-foot bridge over a creek bed in Lake Murray State Park. It was no easy task with the rugged terrain

“Just digging the holes I was thinking I’m never going to be done. All my weekends are going to be spent out here digging holes,” Wes says.

“It was scheduled to take between two to three months. It ended up taking a year and 6 months,” says Wes’s father, Rusty Weaver.

Rusty helped his son plan out the bridge and construct it, along with the rest of Troop 112. Now all kinds of area bicyclists, hikers and outdoor enthusiasts can enjoy the state park a little more.  [video available here]

Keeping with an interesting if perplexing tradition, bugling was the last merit badge he earned.  Weaver had aimed for 121 since he first became a Boy Scout, and his Scoutmaster, David Mannas challenged the troop to earn their Eagle rank and then go beyond the 44 merit badges Manass had earned.

Many of Weaver’s merit badges were earned in the traditional fashion, at the many summer and winter camps he attended over the years. Weaver’s father, Rusty Weaver, became the Scoutmaster of Troop 112 and is a Climbing Director for Arbuckle Area Council. “My dad would be at camp two to four weeks a summer so I stayed at camp and took all the merit badge classes I could. Before I knew it, I had 80 merit badges.”

He attends Plainview High School concurrently with Oklahoma School of Science and Mathematics, Regional Center and looks forward to finalizing his college plans.

Weaver was recognized for his rare achievement at the Arbuckle Area Council Annual Recognition Banquet, Feb. 28 at Camp Simpson in Bromide. His parents are Trish and Rusty Weaver, Ardmore.

Here’s a good story we missed back in September.  This is one more example of outstanding achievement by a good kid, a Scout, that slips by largely unremarked.

Amarillo Scout Coleman Carter got his 121st merit badge in his troop’s court of honor.  He had earned his Eagle Rank in September 2004.

Carter’s 121st badge?  Bugling.  He doesn’t play the trumpet or bugle, so it was difficult. Bugling was also the last badge earned by the New York Scout, Shawn Goldsmith.  Is this a trend?  My recollection is that at least one other member of 121-Merit Badge Club got bugling last.

Earning every merit badge in the book is just one of Carter’s achievements, however.  He’s a National Merit Scholar, ranked #1 in his class at Tascosa High School, and studentbody president.  You can read several of his acheivements here, in the Amarillo Globe-News — and remember, this was before his junior year (he’s a senior this year).

Coleman is a member of Troop 87, sponsored by St. Thomas the Apostle Church.  Amarillo is in the Golden Spread Council, BSA, which serves the Texas and Oklahoma panhandles.

Mr. Coleman is not the first to accomplish this feat, nor will he be the last, I suspect.  I do wish that troops, districts and councils would do more to spread the news of such outstanding feats by Scouts.  A press release kept online, with photos, would have been nice.  (While we’re ranting, would it be so difficult for the Amarillo Globe-News to put its name on its website?  Or has the Globe-News gone out of business?)

Dan Bates served on the staff at Camp Maple Dell for at least the part of one summer when I was on junior staff there, in Utah’s Payson Canyon (1969? 1970?). Maple Dell is a Boy Scout camp operated by the Utah National Parks Council, B.S.A.

I remember Dan because he was one of those overachieving guys who had earned every possible merit badge — 121 at the time, if I recall correctly. By comparison, there are 21 merit badges necessary to earn Eagle Scout (which Dan is, also).

It didn’t go to his head at all. Dan was a great guy, from Heber, Utah, a small town up Provo Canyon in one of the world’s most beautiful valleys. Heber used to be separated from much of Utah by snow every year, but the roads are kept clear these days.

Once I asked Dan what possessed him to get every merit badge, and without pausing long, he said, “What else do you do in Heber in the winter?” It was a flip answer unexpected from the usually more sober Bates.

I think about Dan this time of year when the news stories start appearing about a new Scout, somewhere, who has earned every merit badge. One of the common themes of these stories: Has anyone else ever done it?

In The Press-Enterprise in San Bernardino, County, California, for example, the June 25 issue reports the achievements of Travis Cochran:

If Don Townsend was a betting man he’d put money on the fact that Travis Cochran is the only Boy Scout to have earned every merit badge and the Bronze and Silver Hornaday Medals.

Cochran, 18, of Cedarpines Park, earned 122 merit badges during his scouting career. Twenty-one merit badges must be earned to reach the rank of Eagle Scout.

There is a qualification in this story — Cochran also earned the Bronze and Silver Hornaday Conservation Medals — but you see the drift.

Alas, there is no central location for information about such achievements that I have ever found. Tracking the achievements of Boy Scouts, like the tremendous accomplishments of Scouts Dan Bates and Travis Cochran, generally falls to the local unit. Sometimes a local Boy Scout Council will have some information, but usually not.

History sneaks away so often because no one bothers to invite it to stick around.

Do you know of other Boy Scouts who earned every possible merit badge? We had one such Scout in the Circle 10 Council (Dallas) last year. How many others sneaked by without the hoopla they deserve?

Dan Bates, where are you these days?

Dan wrote in from Mesa, Arizona, and the Grand Canyon Council — see his note in comments, below.  Turns out I remembered it incorrectly — he had 100 merit badges, but not all of them.  His brother got them all.  Glad for the correction.  Happier to have found Mr. Bates.