Kenny sent an e-mail, with a link to Donald Trump, saying “China.”

Among other things, Kenny’s brother James, our younger son, was getting married in Beijing.  Good excuse to travel.  Keeping with the rule that one should spend at least a day in a destination for every hour of travel it takes to get there, we planned 13 days.

After 13 days and a few thousand miles, and perhaps a few hundred supreme dumplings and two Beijing ducks, fugu, and noodles of nearly endless variety, with gallons of stout vinegars you won’t find in a U.S. supermarket, I know I don’t know China.

(I don’t think Trump knows much of anything, a very little in any depth; this is funnier now than it was when Kenny sent the link before the trip.)

Following, not always consecutively, some reports on some of the things we saw. Please stay tuned. 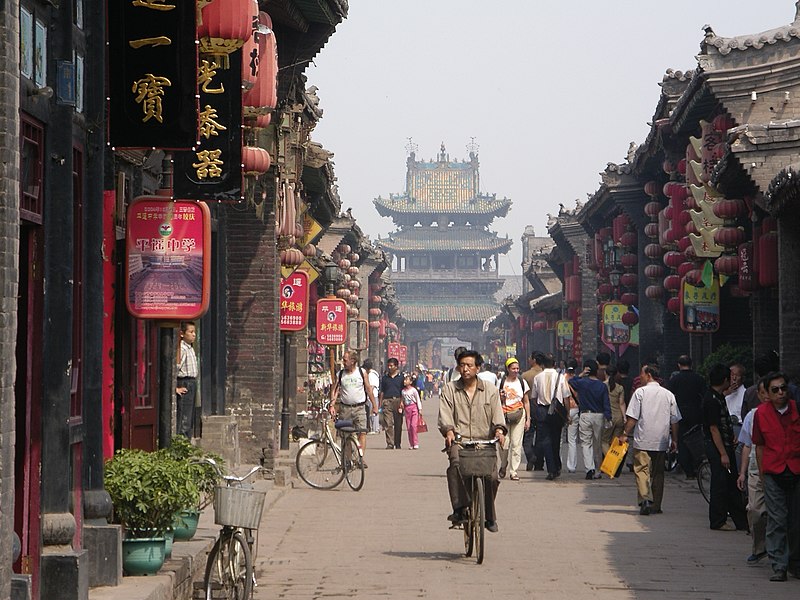 Cats in Crete and China, and evolution

A cat Kenny Darrell photographed in Crete -- notice each eye is a different color.

Darwin wondered about the genetic reasons behind white cats being blind deaf (though, of course, he didn’t call it “genetics” then).  Evolution in action:  White cats today usually can see hear.

Kenny found this cat in Crete, and got a good shot of its eyes, each of a different color — though of course, as soon as the focus was set, the cat leaned forward for a pet.

Kenny’s in China right now.  I wonder if China has cats and dogs on the streets like Crete?

Below the fold:  Darwin on white cats.

END_OF_DOCUMENT_TOKEN_TO_BE_REPLACED

“Penny pinching” conservatives in Congress shamefully worked to guarantee America’s legacy of freedom would be buried at the current Shanghai Expo.  Architecture writer Fred A. Bernstein reports that the conservatives won, and that the current U.S. exhibit in Shanghai is shamed by exhibits from other nations highlighting American virtues that the U.S. pavilion should have shown:

For those things, visitors have to search elsewhere at the Expo: for the statue of Rachel Carson, outside the Broad Air Conditioning pavilion; for a tribute to Frank Gehry, at an exhibit sponsored by the city of Bilbao, Spain (Gehry would have designed a great U.S. pavilion!); and for videos of an American girl, describing what makes cities livable, look to the Russian pavilion. (Incredibly, the Russians shot the video in front of the U.S. Capitol, smartly appropriating an American symbol of freedom.) Carson, Gehry and the girl are Americans worth celebrating.

What will the millions of Chinese who visit the Expo think of the United States? The most sophisticated of them, especially the 45,000 a day who get inside the U.S. pavilion, will see a country determined to promote its corporations rather than its people or its political system. The rest — and this is even scarier — may visit the Expo, a microcosm of the world in 2010, and not think about the U.S. at all.

What in the hell were we thinking?

Seeing a statue of Rachel Carson, the crusading American environmentalist, at the World Expo in Shanghai moved me almost to tears. After all, Carson is a symbol of independent thought and action, both vital U.S. exports.

Too bad the statue wasn’t at the U.S. pavilion. But that building, sponsored in part by Carson’s nemesis, Dow Chemical, was never going to be a celebration of the power of individuals. Indeed, the pavilion, with its bland tribute to “community,” says little about what makes America, and Americans, special.

Check out Bernstein’s piece, “A World Expo flop by the U.S.,” with the subhead:  “Our pavilion at the 2010 World Expo in Shanghai is a huge disappointment, failing to showcase the best of the United States.”

Kicking U.S. butt even when we’re trying to study their language

Who gets the most out of this exchange?

“I want students to know that Chinese people are not crazy,” she said. For instance, one of her students, referring to China’s one-child-per-family population planning policy, asked whether the authorities would kill one of the babies if a Chinese couple were to have twins.

Some students were astonished to learn that Chinese people used cellphones, she said. Others thought Hong Kong was the capital.

Barry Beauchamp, the Lawton superintendent, said he was thrilled to have Ms. Zheng and two other Chinese instructors working in the district. But he said he believed that the guest teachers were learning the most from the cultural exchange.

Conspiracy fans — a category which appears to include almost all climate change denialists — won’t like the news from Planet Green’s “Planet 100.”  This little news show claims evidence that China was the source of the hacking of the University of East Anglia’s climate related e-mails.

Why won’t the denialists like it?  They won’t like it because it makes sense:  Who stood to profit from embarrassing scientists just before the Copenhagen meetings?  China, who wished to avoid any binding agreements, would gain simply by sowing confusion.

Evidence is pretty thin, but for the first time since the hacked e-mails were published, there’s a plausible motive.   Also, the source is also not wholly pristine or reputable in science stuff — the Daily Mail of London, which specializes in gossipy tabloid news.  Watch that space.

It would be good news were it not so bad:  India, usually considered a threat to U.S. dominance in science, has turned its back on climate science and instead, citing junk science claims, rejected overtures to reduce pollution that affects climate.  India appears to have fallen victim to the hoaxters who claim climate change is no big deal.

From the Financial Times:

A split between rich and poor nations in the run-up to climate-change talks widened on Thursday.

He dismissed scientists’ predictions that Himalayan glaciers might disappear within 40 years as a result of global warming.

“We have to get out of the preconceived notion, which is based on western media, and invest our scientific research and other capacities to study Himalayan atmosphere,” he said.

As if the atmosphere of the Himalayan range is unaffected by emissions from Europe or Asia.  As if the glaciers in the Himalayas, and the snowfall,  and the water to India’s great rivers, come independent from the rest of the world.

It’s interesting to see these issues play out politically.   India and China both understand that the U.S. and Europe have much more to lose from climate change than either of those nations.  Climate damage to the U.S. wheat belt, for example, would chiefly close off U.S. production of wheat for export, opening markets for others — like India and China.  Critically, such damage also hurts U.S. ability to offset balance of payments issues, providing economic and finance advantages to China’s banks.  U.S. ports are much more vulnerable to climate change damage, from increase storms and changing ocean levels, than are ports in India and China — and there are more ports that are vulnerable in the U.S. and Europe.

India’s inaction and recalcitrance should not be used as justification for the U.S. to do nothing, thereby slitting its own patriotic throat.

Shake of the old scrub brush to Brown Hell and Watt’s Up With That.

“Isn’t that how the last depression started?”

Econ, government teachers:  Are you ready to explain this one?

And then this one:

“Fasten your seatbelts; it’s going to be a bumpy ride.”

We don’t have the time or resources to go off on more quixotic military missions or to indulge in culture wars. (In China, they’re too busy exploiting scientific advances for competitive advantage to reopen settled debates about Darwin.) Americans must band together for change before the new century leaves us completely behind.

It’s an aside in a longer piece of advice to Obama on issues for the rest of the campaign.  It’s a Sputnik statement for this century, for anyone with the brains to pay attention.

While we wait to see whether someone will confess to PhotoShopping this picture, we teachers might consider using this photo as a hook for a lesson on the differences between the rising totalitarian state of Nazi Germany in 1936, and the rising, increasingly economically free state of the People’s Democratic Republic of China today.

One more lesson plan for this year — it’s reusable next fall, with the added bonus then that by then you’ll have the headlines of the actual Olympics to add to the discussion.

Update: The photo is said to have been was taken by Rowan Benum at a California site (see Mr. Benum’s comment). Since it’s all the rage on conservative sites, where the history ignorance is condemned but the conservative bloggers can’t quite bring themselves to endorse the Communist Chinese, I strongly suspect wondered about a PhotoShop origin. The torch was run through San Francisco; there are few palms in San Francisco (Californians: Can you identify the location?).

Update 5-13-2008: The photographer kindly dropped by comments to note the authenticity of the photo. I agree, the Tibetan prayer flags suggest authenticity; would a hoaxer think of such details?

Discussion questions for the classroom:

Students should look at the photo, and read coverage of the torch relay, such as CNN’s story about the San Francisco relay where Mr. Benum took the photo. Students should have access to information about the International Olympic Committee and its organization, especially the tradition of Olympic Truce. The Charter of the Olympics is probably too long for practical classroom use, but Paragraph 2 can be copied for the students, or perhaps the full page of the “Fundamental Principles of Olympism”:

“Olympism is a philosophy of life, exalting and combining in a balanced whole the qualities of body, will and mind. Blending sport with culture and education, Olympism seeks to create a way of life based on the joy found in effort, the educational value of good example and respect for universal fundamental ethical principles.”
Olympic Charter, Fundamental principles, paragraph 2

There is a wealth of information for classroom use at the website of the IOC. If you’re particularly adventurous, or deep into this topic, check out the podcasts of Olympic history from amateur historian Eli Hunt.

Students should also have some information about Tibet, and the Dalai Lama and Tibet’s government in exile, about the history of Tibet and China’s actions since World War II. Students should have some history of the 1936 Olympics, and they should be familiar with the stories of Jesse Owens’ accomplishments there and his return to a segregated U.S. You may want to provide an article about the U.S. protest of the 1980 Olympics in Moscow, and the Soviet protest of the 1984 Olympics in Los Angeles, and other Cold War moments of Olympic tension.

Tibet a “powderkeg?” How could that be?

Photo of Potala Palace by the late Galen Rowell, circa 1981; for Rowell’s famous photo of the Palace and Rainbow, click here. Read Sweeney’s post, note the difference between the two photos here.

Tip of the old scrub brush to Pharyngula, again, and he tips to Stranger Fruit. Myers is about a lot more than just biology, and so are most other blogs by biologists.

Photo: Chinese MIG on display in front of Potala Palace, one of Tibetans’ most sacred landmarks. From WhereIsEven.com