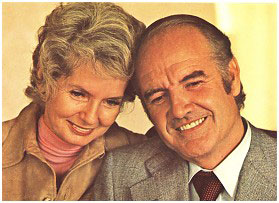 That she was both pretty and smart probably scared the opposition more than anything she ever said. On several occasions I heard her husband insist that she was always the better debater when they debated in school, the smarter of the pair, and the more compassionate.

Two years later her book, Uphill, was ready for publication (Houghton-Mifflin 1974), and as an intern in the office of the Secretary of the Senate Francis Valeo, I was detailed to read the thing, to confirm and verify a blurb for the dust jacket. A few things were clear from the first chapter: She dearly loved South Dakota, she dearly loved the nation, and she dearly loved George McGovern. The book served me well in later years, when I was called to advise other women married to other candidates. The chief lesson I took from McGovern’s book was that a wife (or husband) needs to be comfortable campaigning, or not campaign. I’ve never regretted telling a spouse to campaign when the spouse really felt comfortable doing it; I’ve never regretted telling a spouse to say “no” when the spouse was uncomfortable doing it. I’ve heard a lot of campaign advisors say they regretted pushing someone into a limelight they didn’t want to be in.

Eleanor McGovern took a lot of criticism, much of it opportunistic carping from opponents. They criticized her for speaking up, they said it was a sign of the breakdown of the American family and marriage. Consequently, I saw irony in the Los Angeles paper’s recalling of an earlier interview:

In a 2005 interview with the Argus Leader newspaper in Sioux Falls, S.D., she explained her approach to family life and politics.

“I was determined to help with George’s career, not only by taking responsibility for the family, but by contributing ideas,” she said. “In fact, I never considered it ‘George’s’ career — it was ours.”

McGovern was criticized for standing up for her husband, standing with him, and defending her own family — aren’t those among the highest of family values, and if not, shouldn’t they be?

This entry was posted on Friday, February 2nd, 2007 at 5:58 pm and is filed under Campaigns, Dissent, Elections, History, Lessons of Vietnam, Politics, Presidents, U.S. Senate, Vietnam, Watergate scandal. You can follow any responses to this entry through the RSS 2.0 feed. You can leave a response, or trackback from your own site.