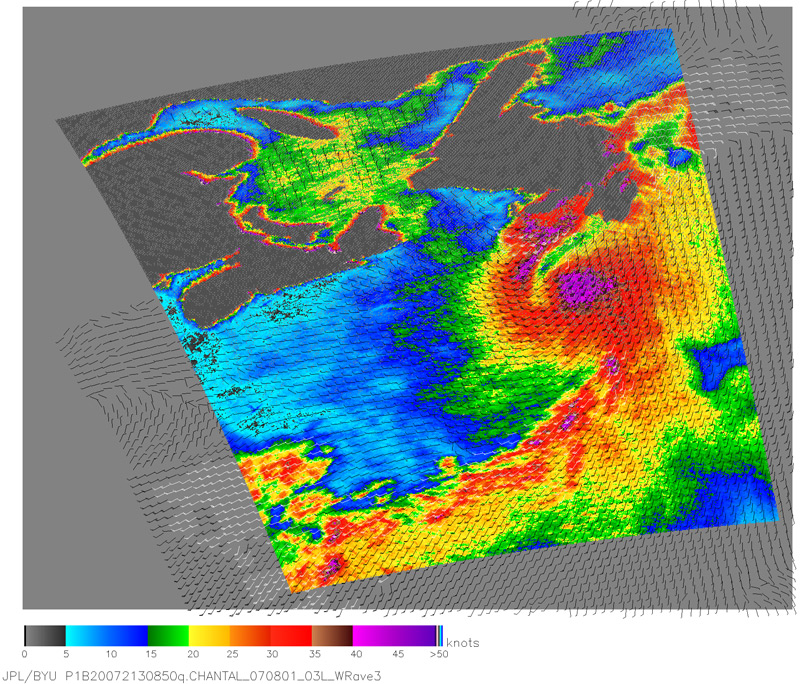 This image of Tropical Storm Chantal depicts wind speed in color and wind direction with small barbs. White barbs point to areas of heavy rain. The highest wind speeds, are shown in purple. The data were obtained by NASA’s QuikSCAT satellite on August 1, 2007, as it was just south of Newfoundland, Canada. NASA image

Here in North Texas, most of our classrooms see refugees from coastal storms from time to time — in fact, most schools still have refugees from Hurricane Katrina, or Hurricane Rita. Plus, sitting close to Tornado Alley, everyone understands that weather is no abstraction here. Weather is personal.

Maps of weather offer teachers a good way to make geography personal, too — or at least more relevant. Those little clouds swirling west from the coast of Africa today could be the hurricane that swamps the Texas coast in a couple of weeks.

An e-mail correspondent sent a link to the Weather Channel’s Hurricane Central, suggesting I might want to track storms for my personal safety (Tropical Storm Chantal is far off in the Atlantic, and racing away; no problems from that storm).

Why not have kids track storms in class? The map above, for example, should be a basic foundation for much of Texas history (the explorers and Spanish colonization, for example), for U.S. history (explorers and the slave trade, the Triangle Trade, the Battle of the Atlantic in World War II, and so on). Get students used to using maps to track important and interesting things, and map use will become second nature, as it should be. The Weather Channel and other sources create updates on that basic map several times a day.

What sorts of storms did the explorers face? The slave ships? How big was the storm that shipwrecked Esteban in Texas? What is one likely source of the massive forest blowdown that created the greater Caddo Lake?

Hurricane season runs through October. There should be a lot of grist for the learning mill just in the daily weather reports. You might also use the weather maps in the daily newspaper (most local newspapers will give you a classroom set for a week for under $20.00 under the Newspapers in Education (NIE) project) (NIE offers an interactive quiz on geography weekly, by the way).

Is there any kid who isn’t fascinated by the weather? That’s your hook. Maps are freely available from the Weather Channel site, and from dozens of others. 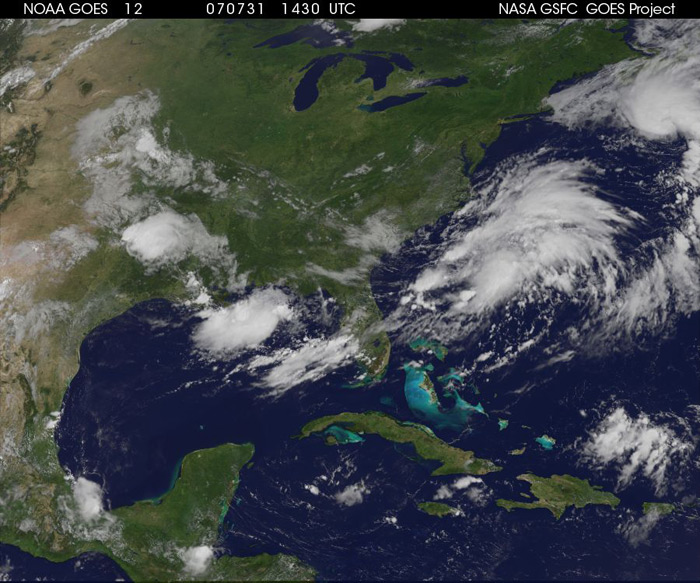 Caption from NASA: The third tropical depression of the Atlantic hurricane season formed around 11:00 p.m. EDT on Monday, July 30 west of Bermuda. Exactly 12 hours later on Tuesday, July 31, at 11:00 a.m. EDT, the storm strengthened into a tropical storm with sustained winds of 40 mph and higher gusts. At that time, the storm was named Tropical Storm Chantal. Chantal was located near latitude 40.2 north and longitude 62.7 west, about 330 miles (530 km) south of Halifax, Nova Scotia and is moving rapidly toward the northeast near 23 mph (37 km/hr). Chantal is not a threat to the United States.

This entry was posted on Tuesday, July 31st, 2007 at 12:08 pm and is filed under Geography - Economic, Geography - Physical, Geography - Political, History, Natural history, On-line education, On-line learning, Technology, Technology in the classroom. You can follow any responses to this entry through the RSS 2.0 feed. You can leave a response, or trackback from your own site.

4 Responses to Tracking hurricanes for classrooms