Steaming into the final days of law school. Papers due. Finals coming. The job demanded extra hours, too.

I had been up well before dawn for some fool reason — job interview? We were closing down the President’s Commission on Americans Outdoors, and I didn’t have a job lined up. Full day at the office, the race through D.C. traffic at rush hour to get to class, three hours of lecture (probably punctuated with that dark, French roast coffee from Au Bon Pain), the train ride and late night walk home, writing the paper and fighting the printer of the crude computer we rented just for the month. It had been more than 20 hours since I’d seen bed.

It was all I could do to stay awake to get up the stairs and into bed. “1:30 a.m.” the clock radio glowed. Three and a half hours to sleep, maybe. I remembered it was April 1, and I smiled as I wondered what odd stories might pop up on the news wires in the morning.

I was concerned, but I was sleepy, too. I asked why.

“My water broke. We have to go.” I felt her side of the bed, and it was wet. I thought it was pretty sneaky of her to go so far as to keep a pan of water close by to make the joke. Just as I got to bed, she had to get up. Riiight!

I kept waiting for the “April Fool!” She’d planned this one well, but I didn’t think it was very funny. I wanted rest.

I turned over to go back to sleep.

“Do I have to drive myself?” Kathryn yelled from the bathroom. We were in Cheverly, Maryland, and the George Washington University Hospital was across town. I jolted awake, and smiled that there would be no significant traffic on the trip. It wasn’t a joke. I hoped I could stay awake for the drive. 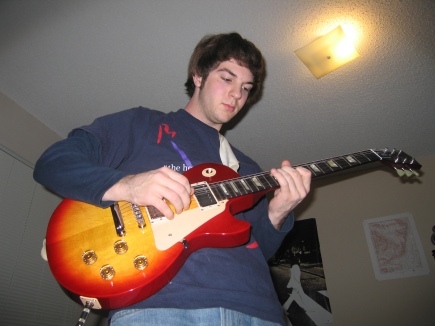 Just about 13 hours of terrifying (for a first-time dad, not to mention a first-time mom) labor later, Kenny was born. Give him credit: He was born so that we got him cleaned up, got Kathryn comfortable, and unshaven and unshowered I could make it to my next class across the street from the hospital (to turn in work and say why I was missing the class).

21 years ago today, I well remember what I was doing. Happy birthday, Kenny!

Notice, Dear Reader, the great attention and homage to history demonstrated in the snapshot above (from last year, really): The Rock and Roll Hall of Fame t-shirt, the denims, the Gibson Les Paul, the “Abbey Road” cover poster on the wall, the topographic map of a favorite hike (near Woodstock, New York, with the Camp Rising Sun crew), the guitar strap his father used in the late 1960s, and the vintage light fixture with just one bulb burning.

Cocoa buyers stand against DDT use in Uganda

Stephen Milloy can’t even herd his own cats — why should we listen to him?

New Vision in Kampala reports that a local council has rejected DDT use, and told Uganda’s government the reasons why:

During a council meeting last Wednesday, the councillors argued that the anti-malaria project would scare away organic cocoa buyers.

According to the LC5 chairman, Jackson Bambalira, Olam and Esko, the cocoa buyers, threatened to stop buying the produce if the area was sprayed with DDT.

“We know that malaria is a number one killer disease in our district but we have no option. The Government should look for another alternative of containing malaria by supplying mosquito nets but not spraying DDT.”

You and I know that indoor residential spraying (IRS) shouldn’t harm crops in any way, even if DDT is the pesticide used. Can the cocoa growers and buyers be convinced DDT won’t get into their products?