Years ago, in Virginia, I had learned that Virginia had only one natural lake, the Great Dismal Swamp.  Accompanying that chunk of information in that lecture was that Texas had only two natural lakes.

But upon arriving in Texas, I could find reference to only one natural lake, Caddo, and it had ceased being fully natural when its maintenance fell to a dam.

A Google search right now on “Texas +’natural lake'” produces ten listings on the first page, all of them pointing to the fact that Texas has just one natural lake.  Here are the first five:

I have found a second natural lake in Texas. It’s not a new discovery at all — it’s just a case of people not having the facts, and overlooking how to find the truth.  It’s especially difficult when the lake hides itself.

Our testing coordinator at Molina High School, Brad Wachsmann, spins yarns that belie his youth.  In the middle of one yarn last year, corroborated by other yarns, he mentioned that he has family in Big Lake, Texas; and he described visiting and having relatives urge people to run out and see the lake since it’s rebirth in torrential rains.

All of this came to mind reading the Austin American-Statesman, still a bastion of great journalism despite problems in the newspaper industry.  On Monday, July 7, the paper ran a story and an editorial about the clean up of the oil industry refuse that killed the shoreline of part of the lake; the springs that once fed the lake have mostly gone dry, but that’s likely due to agricultural water mining.

It’s a story of boom and bust, environmental degradation for profit, and eventual recovery we hope.

Looking at the landscape that surrounds the Reagan County seat, you wonder whether the name Big Lake was somebody’s idea of joke. It’s dry and dusty, where the flora sprouts reluctantly and lives precariously.

Yet, the West Texas town of Big Lake got its name from a natural lake that was fed by springs that have long since gone dry. While the area may not fit everyone’s definition of photogenic, it has its own brand of charm – charm that could be enhanced if the damage done to the fragile ecosystem by salt spills were reversed or even minimized.

As the American-Statesman’s Ralph K.M. Haurwitz reported in Monday’s editions, the University of Texas and Texas A&M systems have benefited from the $4.4 billion in royalty payments and mineral income produced by its West Texas acreage since Santa Rita No. 1 well came in on May 28, 1923.

The salt water byproduct of oil and natural gas production, however, contaminated 11 square miles near Big Lake, killing most everything that grows. The lack of vegetation allows wind and water erosion.

Hey, it gets better.  This is real Texas history, real American history — you can’t make this stuff up.  Haurwitz’s article talks about the heritage of Texas education.   Remember that old story about setting aside certain sections of townships to help fund education in lands on the American frontier?  Texas wasn’t a public lands state as farther west, but it still reserved sections of land for the benefit of education.

Rose petals blessed by a priest?  I’ll wager the priest didn’t make the trip to the top of the derrick.  Haurwitz wrote:

BIG LAKE — Investors appealed to the patron saint of impossible causes when oil drilling began on University of Texas System land in 1921. It didn’t hurt.

Santa Rita No. 1 blew in on May 28, 1923, after rose petals blessed by a priest were scattered from the top of the derrick at the behest of some Catholic women in New York who had purchased shares in the Texon Oil and Land Co., which drilled that first well.

Since then, the UT System’s 2.1 million acres in West Texas have produced $4.4 billion in royalty payments and other mineral income for the Permanent University Fund, an endowment that supports the UT and Texas A&M University systems.

But this long-running bonanza for higher education exacted a price from the remote, semiarid landscape where it all began. Millions of barrels of salt water, a byproduct of oil and natural gas production, contaminated 11 square miles, or more than 7,000 acres, killing virtually all vegetation and leaving the land vulnerable to wind and water erosion. Hundreds of mesquite stumps with three feet of exposed roots testify to the dramatic loss of topsoil.

Where in Texas is Big Lake?

The town of Big Lake is just north of the lake itself, on State Highway 137 running north and south, and U.S. Highway 67 running east and west, approximately 65 miles west of San Angelo.   Big Lake sits about 10 miles north of Interstate 10, and about 75 miles south of Interstate 20.  Big Lake calls itself “the gateway to the Permian Basin.”

Big Lake is the home of Reagan County High School.  Jim Morris was baseball coach for the Reagan High Owls when his team persuaded him to try out for a major league baseball team.  His story was chronicled, with some artistic license, in the Disney movie “Rookie.”

Land managers are working to stop erosion on the often-dry shores of Big Lake using any trick they can find.  One trick:  Plant salt grass.

Salt grass?  Along Texas’s Gulf Coast, there are a few species of grass that, while not halophytes, are at least salt tolerant.  Salt grass.  This grass made it profitable to graze cattle on what would otherwise have been unproductive land in the Texas cattle boom.  This role in Texas history is memorialized in the Salt Grass Steakhouse chain, now found in five states.

And if planting salt grass works to control erosion, it will help clean up a large part of Texas other natural lake, Big Lake. 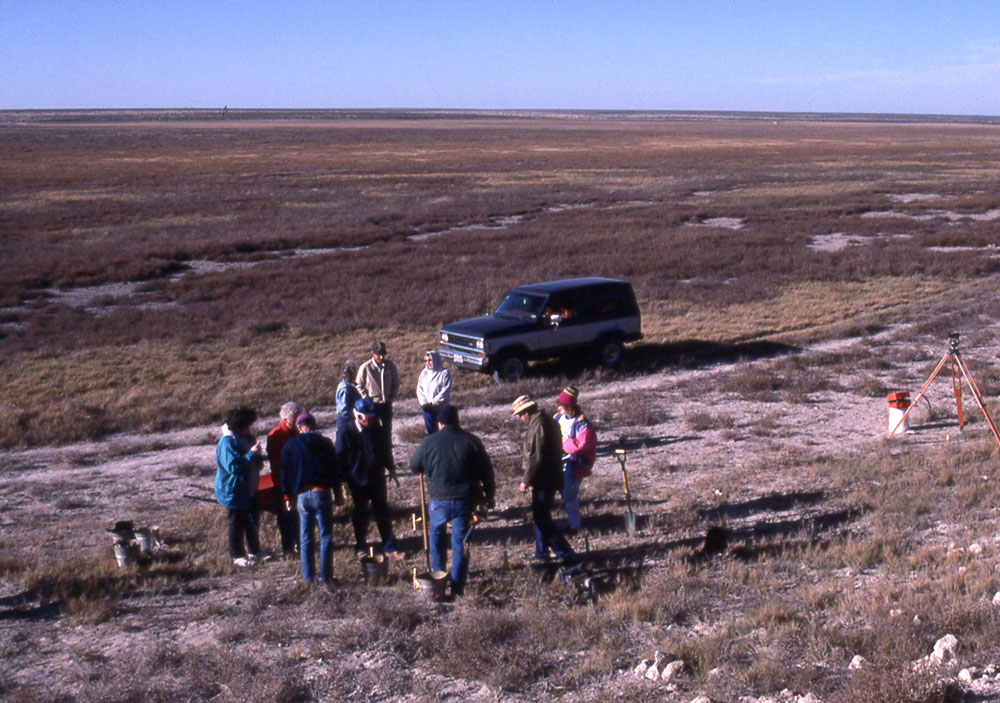 Field crew meeting at the outset of the 1992 excavations at the Big Lake Bison Kill site. The dry bed of Big Lake stretches for miles in the background. Big Lake is an intermittent saline lake or playa, an uncommon landform on the Edwards Plateau. Photo by Larry Riemenschneider, Concho Valley Archeological Society.

More details about Big Lake and prehistory, below the fold.

From a commercial site, the NightOwl Bakery and Roastery, in Big Lake, Texas:

The city got its name from the large dry lake bed just south of the city on Hwy 137, but the lake is far more than just a dry land lake feature, impressive though it is.  It is the largest playa on the western Edwards Plateau, and possibly the largest in Texas, a significant geological feature covering over 2100 acres, and differs from other playas in the Southern Great Plains not only in size (the average is 17 ac), but in having three major draws that feed into it, with a total watershed coverage of over 100 sq. miles.  Though historic springs undoubtedly contributed water continually, the lake only remained full during extended periods of wet weather and in extreme rainfall runoff events.   In the photo below, taken from the middle of the highway looking west, barely visible to the left on the horizon is the escarpment of the Edwards/Stockton Plateau near Best, 11 miles away, and closer in to the right one can see the light-colored bluffs, a cliff about 30′ high, showing the boundary of at least two major dunes to the north and northeast of the lake bed, formed over thousands of years by the deposition of windblown material from the lake bottom.

In 1994, Solveig A. Turpin, of the Texas Archeological Laboratory at UT, Austin conducted a brief study of the lake and Big Lake Draw in response to artifact and bone fragments found in the bottom of the lake during pipeline construction.   In her 1994 detailed report, “A Reconnaissance of Big Lake Draw: Implications for  Prehistoric Playa Utilization in Reagan County, TX”, part of the TARL Technical Series 40, she observed that the draw course has remained essentially unaltered for the past 5000 years, and that a bison kill, probably of the Archaic Period, had taken place in the bottom of the lake, itself.   Artifact evidence, midden concentrations, and grinding mortars from the draw and lake date basically from the Late Archaic and subsequent periods, although PaleoIndian occupation is indicated by one Folsom point found by a local collector.  Sandstone grinding material suggested that early occupants in this area interacted with neighboring areas, and that the Big Lake country was a “targeted resource.”

In a more exhaustive report in the Plains Anthropologist , Journal of the Plains Anthropological Society in February, 1997, entitled “Stuck in the Muck: The Big Lake Bison Kill Site (41RG13), West Texas”, she goes even further in her conclusions.   From the introduction of that article, she concludes, “The Big Lake bison kill bears upon two problems of regional importance.  Perhaps most importantly, the site provides a start date for the period of extreme aridity that undoubtedly markedly affected the distribution and economy of human populations some time after 8000 years ago.  Secondly, the site bridges the spatial and temporal gap between two equally well known bison kill sites- Bonfire Shelter in the Lower Pecos region, 160 km to the south, and Lubbock Lake on the Llano Estacado, 250 km to the north.”

If you find yourself on the way to or from Big Lake from the south, the next time you cross the expanse of seemingly featureless dry lake bed, pause for a moment in your thoughts, and reflect upon the importance of this lake to the past area occupants over a long span time.   It is sad to me, today, to consider that the current occupants of this region, of which I am one, form the most concentrated, continuous occupation of this area over several thousand years of time, and, of all the populations that have existed on this land,  we have the least dependence upon it, and know the least about it;  and we do not appreciate it at all for what it is – a feature whose presence meant life and survival for those of the past.

Nota bene:  Surely you’ll want to read in Millard Fillmore’s Bathtub about the efforts to save Caddo Lake, under a headline we now know to be in error.

Encourage others to take a jump in the lake of geographical lore:

This entry was posted on Monday, July 20th, 2009 at 4:25 pm and is filed under Accuracy, Cost of Green, Environmental protection, Geography - Physical, geology, History, Science, Texas, Travel. You can follow any responses to this entry through the RSS 2.0 feed. You can leave a response, or trackback from your own site.

26 Responses to News flash: Texas has a second natural lake!