The first personal computers were more than a decade away.  Today’s teleprompters — a computer screen mounted to reflect into a glass in front of a television camera lens — had not been conceived.  Teleprompters were cathode-ray tube televisions attached to a massive television camera with a clunky device.  The image would be reversed to reflect correctly.  Into that television would be a closed-circuit feed of a scrolling piece of paper on which was typed, in very large letters, the script the speaker was to read.  In this case, of course, the speaker was the President of the United States, Lyndon B. Johnson.

In 1967, a special typewriter was required to type out the oversized-font, easy-to-read script on a roll of paper with sprocket holes along the side to enable an automated scrolling.

Just looking at the equipment for the technology of the time is an education. Teleprompters allow someone reading a script to look directly into the television camera lens, giving an impression to a viewer that the person is speaking directly to them, instead of glancing down at a script and back at a camera.  Research showed viewers tend to grow disinterested in people looking down at a script, and would more likely be engaged by someone appearing to look at them.

Teleprompters existed in the 1950s, but many local television stations did not use them until into the 1960s — news broadcasts of the time often featured the anchors reading from written scripts on a desk in front of the broadcaster.  A few intrepid news anchors, throwbacks to a more theatrically-inclined era, would memorize an entire script every night.

The schematic is based on modern, smaller television cameras and modern, thin devices to project the word images.  Older versions were larger — sometimes much larger. Ed Mason as a studio technician, adjusting the teleprompter before a local broadcast, WCIA television, Channel 3 in Champaign, Illinois; photos from site of DougQuick.com, an on-line tour of history of broadcasting

One popular version put a simple paper scroller mounted above the lens of the very large, studio television cameras — a broadcaster’s eyes could focus an inch above the lens, and viewers couldn’t tell he or she was not looking directly into the lens.

Modern teleprompter mounted on television camera, circa 2005; text is projected from a thin screen on the top of the camera lens – Wikipedia image

Teleprompters emerged as a symbolic political whipping device in the early 21st century. Partisans wishing to impugn the intelligence of a politician complain that he or she cannot speak extemporaneously, without a script. Oddly, the charge was rarely leveled at President Ronald Reagan, famous for his use of scripts in almost every situation. Reagan’s White House pushed modernizing of the technical devices employed at the White House, including the latest in teleprompter devices.

A modern, “conference” teleprompter of the style usually seen at public appearances by politicians.

Modern teleprompters cost a fraction of earlier versions.  Everybody uses them now — I’ve even heard of first-time candidates who did not have to go to teleprompter school.

Here I am, reading from a teleprompter at the George H. W. Bush Library and Museum in College Station, Texas, in 2011:

Here I am trying out the teleprompter and podium at the George H. W. Bush Library and Museum, College Station, Texas, in 2011.

And more people using teleprompters, with years in captions, so far as I can get them.

President Reagan often used teleprompters — in a computerized form by then.

A more modern use: Mostly an encore post; some links added in quoted text, for ease of reference. 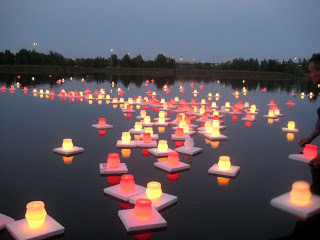 Hiroshima residents float lanterns in the river to remember the dead after a traditional Hiroshima Day concert (2008?); the concert and lantern floating are annual events

67 years ago, U.S. military action brought a quick close to hostilities without an invasion of Japan, with the detonation of two atomic bombs, one over Hiroshima on August 6, 1945, and one over Nagasaki on August 9.

Events marking the anniversary last year and this year carry the spectre of the Fukushima nuclear power plant, which experienced core meltdowns in reactors as a result of a tsunami earlier in 2011.  Anti-nuclear activists in Australia note similarities between the bombs ending the war, and the disaster at Fukushima. Curiosity is on the ground.

What were the odds?  What did NASA and Jet Propulsion Laboratories (JPL) need to overcome?   Watch this:

PASADENA, Calif. — After eight years of planning and eight months of interplanetary travel, NASA’s Mars Science Laboratory pulled off a touchdown of Super Bowl proportions, all by itself. It even sent pictures from the goal line.

The spacecraft plunged through Mars’ atmosphere, fired up a rocket-powered platform and lowered the car-sized, 1-ton Curiosity rover to its landing spot in 96-mile-wide (154-kilometer-wide) Gale Crater. Then the platform flew off to its own crash landing, while Curiosity sent out a text message basically saying, “I made it!”

That message was relayed by the orbiting Mars Odyssey satellite back to Earth. A radio telescope in Australia picked up the message and sent it here to NASA’s Jet Propulsion Laboratory. When the blips of data appeared on the screens at JPL’s mission control, the room erupted in cheers and hugs.

Congratulations!  We need good news, and this is great news.

So far as I can tell, no U.S. television network covered the event live in Pasadena.  What a shame.