No more than 3 points in your presentation!

Interesting video from Ethos3, a company that works on presentations and helping others make better presentations.

Um, no, I don’t think they aim at teachers and educators — it’s a for-profit group, not a charity.

That’s also one of my concerns.  Here’s one of a series of short videos Ethos3 prepared, to help you with your next presentation or, you hope, the woman or man who will be making that presentation you have to watch next Wednesday morning at Rotary Club, or at Scout leader training next Saturday, or kicking off the budget planning exercise next Monday (at 7:00 — coffee provided so don’t be late!):

But what about teachers, who have to slog through 150 specific items for the state test?

In a world of bad bosses, it’s almost impossible to get a really great principal at a school.  Teachers gotta slog on anyway.

You won’t have the time to do the presentation your students deserve, but you should try, anyway.

Dreaming for a minute:  I wish I could get a team like this to help out with designing a curriculum, figuring out where presentation work, how to give them real punch, and where not to use them at all.

What do you think?  Can you tell your story in just three points?  Can you reduce a lecture to three key points that would be memorable, and that spurs students to learn what they need to learn?

Other side of the mountain: Timpanogos

East side of Timpanogos, by the Heber Valley Convention and Visitors Bureau: 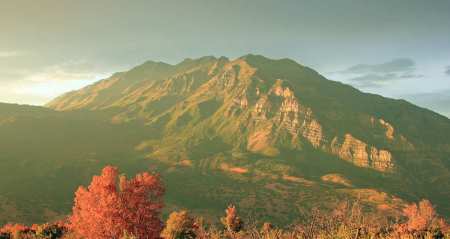 Timpanogos from the east – replacement for photo that originally nested here. Utah.com image

Tip of the old scrub brush to Susan Reeve Lewis.

Horsetail Fall flows over the eastern edge of El Capitan in Yosemite Valley. It’s a small waterfall that many people don’t notice, but it has gained popularity as more and more people have noticed it can glow orange during sunset in mid to late February. The most popular place to see Horsetail Fall seemingly afire is El Capitan picnic area, west of Yosemite Lodge and east of El Capitan (see map below). The “firefall” effect generally happens during the second half of February. A clear sky is necessary for the waterfall to glow orange. Photo: Bethany Gediman, NPS

People living close to National Parks are lucky to do so; people who work in them luckier still, in the lifetime sweepstakes for seeing breathtaking sites.  NPS employee (Ranger?) Bethany Gediman caught this image of Horsetail Fall in Yosemite National Park.

Be sure to see the video of Yosemite Nature Notes No. 14, posted here earlier. It shows Horsetail at sunset in full glory.  Great photography.

How to get there:

Map of Yosemite National Park, showing Horsetail Falls and hiking trail to get to viewpoint in the photograph.

Gun nuts at Fox pull a bait and switch; Obama already outflanks them

Yeah, I know: Someone has sent you a post on Facebook claiming there are more murders from hammers than guns, and they quote Fox.

If they’re not complete nuts, they were careful and noted it was rifles being compared, and not all guns.

Then, just to rub it in, that person who sent you the link said something like, ‘so you propose hammer control, too?’

The best debaters in college learn to listen to what their opponents say, and not what they think their opponents should have said.  Good lawyers listen like that, too, in court, and in depositions.

See that last word in the headline?  “Rifles.”

Yeah, it’s a limited part of the total population of guns.

Total gun deaths in 2011 were 8,583 — continuing a five-year trend downward, thanks for small blessings.  Homicides only, not counting suicides — according to figures compiled by the FBI.

No, the same tally shows 496 people were murdered by use of  “Blunt objects (clubs, hammers, etc.).”

Now, the gun nuts say that it’s fair to compare rifle deaths only, since only the AR-15 is being questioned, and is the target for “taking guns away.”

Limit ammunition magazines to 10 rounds:  The case for prohibiting high-capacity magazines has been proven over and over; the shooters at Virginia Tech, Tucson, Aurora, Oak Creek, and Newtown all used magazines holding more than 10 rounds, which would have been prohibited under the 1994 law. These magazines enable any semiautomatic weapon to be used as an instrument of mass violence, yet they are once again legal and now come standard with many handguns and rifles. Congress needs to reinstate the prohibition on magazines holding more than 10 rounds.

President Obama laid out a plan that will make it substantially more difficult for people who shouldn’t have guns suitable for mass killings, to have them.  More important, however, the President’s plan steps up the non-gun means available to stop mass shootings before a shooter gets to a campus armed and ready to kill.

The “discussion” will get more ugly, I predict, before it gets better.

The arrest records and fingerprints of Rosa Parks http://t.co/qb1FUr7wEb

Maria Popova at Exp.lore.com suggested some tools for teachers, about Rosa Parks and the Montgomery Bus Boycott:

Fingerprint sheet from the arrest of Rosa L. Parks, in Montgomery, Alabama, in December 1955.

The arrest records of Rosa Parks. Pair with Susan Sontag on courage and resistance.

Popova’s suggestion of Sontag’s piece — which is available at Popova’s site — lends depth to this assignment frequently lacking in high schools. The other link Popova offers takes us to the National Archives and their great bank of classroom materials, including a few more documents from the incident:  “Teaching from Documents:  An Act of Courage, The Arrest Records of Rosa Parks.

I like to use these materials around the anniversary of Parks’s arrest on December 1, which is out of sequence for the civil rights movement and a couple of months before Black History Month.  I find it useful to talk about events on the anniversary of the events, especially to give students more than one pass at the material in class, and also to link whatever is being studied in sequence at that moment (often the Civil War in Texas classrooms) with later events, and current events, as a view in to the web of interlinked occurrences that really make up history.  (Yes, I’m an advocate of dropping the name “Black History Month” and teaching it throughout the year; though a Black Heritage Appreciation Month is a help.)

Modern students seem to me to be particularly ill-informed on current events.  Far too many of them do not read newspapers, not even the comics.  This makes more important the classroom linking of past events with current events that students don’t know about, or fail to recognize the significance.

President Obama, sitting on the bus on which Rosa Parks was arrested in 1955 – White House photo by Pete Souza.

More, and other resources:

Summer 1955: Desegregation workshop at Highlander Research and Education Center. Highlander Center caption:  Rosa Parks is at the end of the table. Six months later, her actions sparked the Montgomery Bus Boycott. [Who are the other people pictured?]

Unusual?  No, this is really a typical marriage of agriculture, government agencies, science and hunters, working on problems of wildlife management, feral hogs in this case.

Feral hogs are running wild across Texas, at great cost to farmers, ranchers, and native wildlife. Hunters are helping, but science may prove critical to controlling the invasion on a broader scale. For more information on feral hogs and feral hog control, visit: http://www.tpwd.state.tx.us/huntwild/…

When it comes to feral hogs, every Texan turns environmentalist.

Quote of the moment: Should we reconsider Millard Fillmore?

For an accidental president, a man who no one expected to take the office; for a guy whose term was marked by his party’s rejection of his policies so much that they did not even entertain the idea he might be the nominee in the next election; for the last Whig president, an obvious dinosaur of a dying political view; for a guy so obscure that a hoax more than a half-century later remains his greatest acknowledged point of reference, Millard Fillmore left the U.S. in good shape.

Should that be his real legacy?

Campaign poster for Millard Fillmore, running for president in 1856 on the American Party ticket. He carried Maryland, which is probably ironic, considering Maryland’s Catholic roots, and the American Party’s anti-Catholic views, views probably not entirely shared by Fillmore; the American Party is more often known as the “Know-Nothings.”  Image from the Library of Congress American Memory files.

These are the last two paragraphs of his final State of the Union message, delivered on paper on December 6, 1852.  Perhaps establishing a tradition, he made the message a listing of current zeitgeist, starting out mourning the recent passing of Daniel Webster, and the abatement of epidemics of mosquito-borne plagues in several cities.  He recited activities of the government, including the abolishment of corporal punishment in the Navy and improvements in the Naval Academy; he mentioned U.S. exploration around the world, in the Pacific, in the Amazon River, in Africa, and especially his project to send a fleet to Japan to open trade there.  He noted great opportunities for trade, domestically across an expanded, Atlantic-to-Pacific United States, and in foreign markets reachable through both oceans.

The last two paragraphs would be considered greatly exaggerated had any president in the 20th century delivered them; but from Millard Fillmore, they were not.  He gave credit for these achievements to others, not himself.

In closing this my last annual communication, permit me, fellow-citizens, to congratulate you on the prosperous condition of our beloved country. Abroad its relations with all foreign powers are friendly, its rights are respected, and its high place in the family of nations cheerfully recognized. At home we enjoy an amount of happiness, public and private, which has probably never fallen to the lot of any other people. Besides affording to our own citizens a degree of prosperity of which on so large a scale I know of no other instance, our country is annually affording a refuge and a home to multitudes, altogether without example, from the Old World.

We owe these blessings, under Heaven, to the happy Constitution and Government which were bequeathed to us by our fathers, and which it is our sacred duty to transmit in all their integrity to our children. We must all consider it a great distinction and privilege to have been chosen by the people to bear a part in the administration of such a Government. Called by an unexpected dispensation to its highest trust at a season of embarrassment and alarm, I entered upon its arduous duties with extreme diffidence. I claim only to have discharged them to the best of an humble ability, with a single eye to the public good, and it is with devout gratitude in retiring from office that I leave the country in a state of peace and prosperity.

What president would not have been happy to have been able to claim as much?  Historians often offer back-handed criticism to Fillmore for the Compromise of 1850; in retrospect it did not prevent the Civil War.  In the circumstances of 1850, in the circumstances of Fillmore’s presidential career, should we expect more?  Compared to Buchanan’s presidency and the events accelerating toward war, did Fillmore do so badly?

Have we underestimated Millard Fillmore?  Discuss.