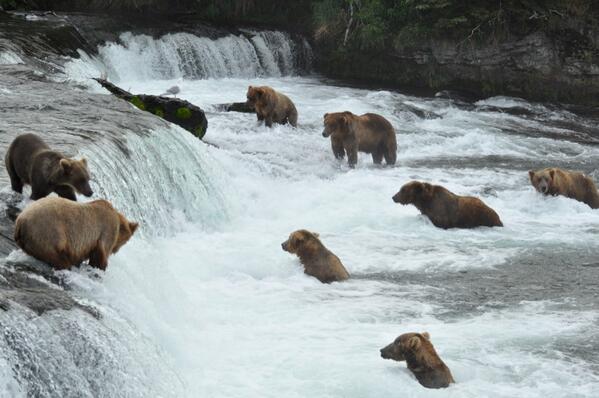 You’ll be hard pressed to find a photo with more brown #bears in it than this one @KatmaiNPS. #Alaska pic.twitter.com/j3QpP5u30G

Fishing brown bears, and one seagull, in the Katmai National Park and Preserve, from the Department of Interior’s Twitter feed.

Thanks to Bill Martin, Jr., and Eric Carle,  author and illustrator respectively of the classic Brown Bear, Brown Bear, What Do You See? In 2010, the Texas State Board of Education pulled this book from reading standards suggested books, because the board confused Bill Martin, Jr., with another Bill Martin who had written socialist texts. The book was eventually reinstated.

It is a model of leadership, an example more leaders should follow — though few do. It’s one more example of the high caliber leadership Dwight Eisenhower demonstrated throughout his life. In it’s imperfections, handwritten, it should take your breath away.

So again, today, on the 70th anniversary of the D-Day invasion, we remember.

This quote actually isn’t a quote. It was never said by the man who wrote it down to say it. It carries a powerful lesson because of what it is.

In preparing for the D-Day invasion, Supreme Allied Commander Dwight Eisenhower carefully contemplated what would happen if the invasion failed.  What if the Germans repulsed the Allies, and no foothold was established to re-take the main body of Europe from the Germans?

Ike’s answer is a model of leadership:  He would take the blame.  Regardless what happened, Ike took full responsibility for the failure, giving credit to the soldiers who would have sacrificed in vain, perhaps their lives.

The Bathtub recently posted Gen. Dwight Eisenhower’s “order of the day” to the troops about to conduct the Allied invasion of Normandy — D-Day — to establish the toehold in Europe the Allies needed to march to Berlin, and to end World War II in Europe. As a charge to the troops, it was okay — Eisenhower-style words, not Churchill-style, but effective enough. One measure of its effectiveness was the success of the invasion, which established the toe-hold from which the assaults on the Third Reich were made.

Photo shows Eisenhower meeting with troops of the 101st Airborne Division, 502nd Parachute Infantry Regiment, on the eve of the invasion. It was these men whose courage he lauded.

When Eisenhower wrote his words of encouragement to the troops, and especially after he visited with some of the troops, he worried about the success of the operation. It was a great gamble. Many of the things the Allies needed to go right — like weather — had gone wrong. Victory was not assured. Defeat strode the beaches of Normandy waiting to drive the Allies back into the water, to die.

Eisenhower wrote a second statement, a shorter one. This one was directed to the world. It assumed the assault had failed. In a few short sentences, Eisenhower commended the courage and commitment of the troops who, he wrote, had done all they could. The invasion was a chance, a good chance based on the best intelligence the Allies had, Eisenhower wrote. But it had failed.

The failure, Eisenhower wrote, was not the fault of the troops, but was entirely Eisenhower’s.

He didn’t blame the weather, though he could have. He didn’t blame fatigue of the troops, though they were tired, some simply from drilling, many from war. He didn’t blame the superior field position of the Germans, though the Germans clearly had the upper hand. He didn’t blame the almost-bizarre attempts to use technology that look almost clownish in retrospect — the gliders that carried troops behind the lines, sometimes too far, sometimes killing the pilots when the gliders’ cargo shifted on landing;  the flotation devices that were supposed to float tanks to the beaches to provide cover for the troops (but which failed, drowning the tank crews and leaving the foot soldiers on their own); the bombing of the forts and pillboxes on the beaches, which failed because the bombers could not see their targets through the clouds.

There may have been a plan B, but in the event of failure, Eisenhower was prepared to establish who was accountable, whose head should roll if anyone’s should.

Our landings in the Cherbourg-Havre area have failed to gain a satisfactory foothold and I have withdrawn the troops. My decision to attack at this time and place was based upon the best information available. The troop, the air [force] and the navy did all that bravery and devotion to duty could do. If any blame or fault attaches to the attempt, it is mine alone.

Who in the U.S. command would write such a thing today?  Who else in history would have written such a thing?  Is there any indication that Julius Caesar, Alexander the Great, Attila the Hun, Genghis Khan, or any other commander of a great army in  a world-turning invasion, considered how to save and perhaps salve the reputation of his troops, though they had failed?

Another  angle of the meeting with the troops:  General Eisenhower speaks with members of the 101st Airborne Division on the evening of 5 June 1944.  Wikipedia image

Typewriter of the moment: Bill Moyers

From Moyers’s Facebook feed: Happy 80th Birthday, Bill Moyers! Here he is at 16 years old as a cub reporter at the Marshall News Messenger newspaper in Marshall, Texas, the town (pop. 25,000) where he grew up

A newsroom Royal. A lot of good writers started out on those.

Moyers went astray after a while, and got a divinity degree and ordination in Dallas, at Southwest Theological Seminary — but Lyndon Johnson had been watching him before at the University of Texas and University of North Texas, and snatched him up as a press aide.

You probably know Moyers from Public Television.  Yesterday was his 80th birthday — he was born June 5, 1934, in Hugo, Oklahoma.

Family stickers on the van . . . too far

It was spotted in Utah, of course (note the mountains in the background).

Yeah, we had that family living next door to us for a while.

Look closely, it appears not to be a claim for a polygamous family . . . oy.  Surely, it is a joke.

Maybe it’s a kindergarten teacher who thinks all students are her kids, or his kids. Maybe the driver just wants to start conversation, or convulsions of laughter.

Typewriter of the moment: E. B. White, in rural Maine

E. B. White writing in his boat shed overlooking Allen Cove, 1976, using a portable manual typewriter. Photo by Jill Krementz, from her book, The Writer’s Image.

Someone much more familiar with typewriters may be able to identify the machine.

Don’t you love the way the water looks as though it’s a painting, a work of art, hanging on the wall?

Turns out White was very fond of Dachsunds.

E. B. White at work, with his Dachsund, Minnie, looking on.