Welcome to the 63rd edition of Four Stone Hearth (4SH), the only blog carnival on the planet dedicated entirely to the four stone foundations of modern anthropology. We’re happy to invite readers in for a soak at Millard Fillmore’s Bathtub.

It’s spring, and in spring a young anthropologist’s fancy turns to thoughts of . . . grading papers, maybe love, getting ready to dig over the summer, finishing up the term, love, getting the snow tires off the car, the Texas State Board of Education, if not love then maybe a good dinner companion, finishing the paper up for publication (where?), how to finance next semester, how to stretch the grant, love in the future, where to get the next grant . . . almost everything but submitting entries to that history and social studies guy at Millard Fillmore’s Bathtub.

Interesting entries this edition, but in onesies and twosies, not by dozens.  Trusting that the enterprise is blessed by the patron saints (St. Damasus I, or St. Helen, for archaeologists; is there a patron saint for anthropology or linguistics? In a pinch we can just invoke St. Francis de Sales, the patron saint of writers and authors), we push on.

The Four Stone Hearth name pays homage to four areas of anthro:  Archaeology, socio-cultural anthropology, bio-physical anthropology and linguistic anthropology.  Shorter form: What humans did, and a bit of what we do.

So, grab a cup of cowboy coffee (the favorite of diggers and backpackers, and sheep herders).  In no particular order, and in no particular theme, here’s what caught our fancies over the past couple of weeks:

Globalization — love it or hate it — how does it really affect us? The Spitoon comments on newly-published research that reveals people are choosing mates from farther abroad than before. At least, that’s what our genes show.  People don’t marry people from their own village so much.  Unanswered:  How does this affect human evolution?

Digital Archaeology: Colleen Morgan at Middle Savagery, demonstrates the clash between the earthen and the electronic — she spoke on a panel at SXSW (“South By Southwest”), the massive, hip music conference and riot in Austin, Texas.  Topic:  The Real Technology of Indiana Jones.  It starts out with a promising description:  “Archaeologists no longer rely on whips and fedoras . . .”  The panel also featured Bernard Frischer of the University of Virginia, and Adam Rabinowitz, University of Texas at Austin.  “Notes and tweets” from the panel. 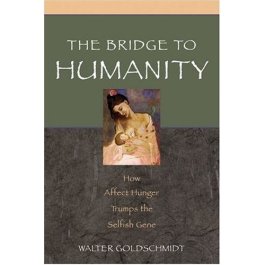 Cover to Goldschmidt's book, The Bridge to Humanity, Oxford Press

Does morality have any connection to evolution — Appropriate for the opening day of hearings and voting on Texas public school science standards, Greg Downey at Neuroanthropology looks at the evolution of altruism, with a review and commentary on Walter Goldschmidt’s book, The Bridge to Humanity. Goldschmidt notes that selfish genes don’t explain everything, and that there’s probably a good function to a baby’s being very cute.  (Goldschmidt must hang out at our PTA meetings:  “It’s a good thing the kid’s so cute, or he’d have been dead long ago.”)  “Affect hunger” is not a common phrase in daily conversations, and it deserves a solid explanation.  Altruism cannot form naturally, many education officials in Texas believe, and so they oppose teaching evolution in public schools.  They’ll be too busy to read this article before they vote on Friday — but they should read it, and maybe the book, too.

Martin Rundkvist at Aardvarchaeology offers a lighter but critical note, on putting ice cream sticks in museums. Archaeological museum weirdness.  What should a museum be?  In the past 14 months I’ve had the pleasure of spending time (on someone else’s dime!) at the Abraham Lincoln Presidential Library and Museum in Springfield, Illinois, and at the greatly expanded museum and visitor center at Mount Vernon, Virginia, George Washington’s estate.  In these places there is a concerted effort to make museums more informative, more inviting, and more focused on education missions.  Both museums feature multimedia presentations designed to kick off anyone’s visit with a punch, holographic images in Springfield, and theater seats that kick and get snowed on at Mount Vernon.

Tuamatuan Conception of the Cosmos, by Paiore. Inspiration for Margaret Mead's fieldwork in American Samoa. Running After Antelope

RafRaf Girls notes that someone is collecting images used to illustrate anthropology, linguistics and social theory.  It’s a form of on-line museum, and Martin’s concerns are well directed:  How much of this stuff should be preserved, especially if the preservation perpetuates odd ideas or misinformation?  Browse the images, see for yourself.  Nice to know it’s there, if you need it.   (Is all this stuff from Running After Antelope?)

Again at Neuroanthropology, Daniel Lende offers what a reader in comments calls “the best damn article on alcoholism” in “The Insidious, Elusive Becoming:  Addiction in Four Steps.” I thought it ironic that the post is illustrated with a diagram showing how to tie the famous knot, the bowline, in four steps.  Every Girl Scout and Boy Scout knows the bowline is the “lifesaving knot,” a knot that is used to tie loops used to hoist people from danger.  The bowline will not slip, and so will not suffocate the victim upon lifting.  Addiction is no bowline.  Falling into addiction involves four steps Lende outlines, basing the title on a line from Caroline Knapp’s Drinking:  A Love Story.

But we do know much more about the process of becoming than we used to. Here I will outline four important factors that shape the terrible becoming – vulnerability, training, intention, and meaning. My focus will be on understanding the subjective transformations, and I will use Knapp’s own words and experiences to help us grasp how this happens. In a forthcoming post, I will address a core biological process—competitive plasticity—that acts as the complement to this description, a process that has also helped me see the interactions in new light.

A Primate of Modern Aspect (formerly Zinjanthropus?) offers what I thought to be a fascinating story about studying the inner ears of fossilized primates, “Navigating the Bony Labyrinth.” It’s a continued exercise in pulling paleontology out of the usually-imagined realm of dusty reconstructions in badly-lighted corners of musty museums.

Fossil primates can pose some especially interesting questions to a paleoprimatologist.  Because they live in trees, many different kinds of locomotion are possible.  We can look at limb proportions to see if the little guys were clinging to vertical supports and then leaping from them, or perhaps walking on top of thick, horizontal branches, or maybe even swinging below these brances.   We can look at the shape of the scapula to see whether the animal kept its arms underneath itself or used them to reach out to the side or above itself.  We can look at the fingers to see if they were grasping branches or balancing above them.  In species known only from cranial bones, we can also look at the ear bones to see how these guys positioned themselves while in the trees.

It’s spring, I know, and we are hopeful.  Politics and war push on, however, and they push into the fields of science we love. Some things we would like to confine to dusty corners of musty museums, like war.

Afarensis notes that the coup d’etat in Madagascar threatens lemurs in the forests of the island.

It’s on the fringes of blogging, but well worth knowing about:  San Diego City Beat tells a story of guerrilla archaeology, beating the construction of the border fence between the U.S. and Mexico to get a dig done, “Hush hush archaeology.”

It’s spring, and students in American schools look forward (ha!) to the standardized tests they must take under the New Regime.  I was interested to see Kris Hirst has started a weekly quiz, this week about bog bodies — just the sort of stuff I need for my classroom to take out the tension and get kids to think.  Now, if only it were on PowerPoint, or in a form I could just print off to open a class . . .

Wish us luck here in Texas this week.  Science standards, especially evolution studies, are on the grill before the State Board of Education, where creationists hold sway. If  you know someone in Texas, you may want to persuade them to call their representative on the state board.  No scientist is an island, as John Donne would have said had he thought a bit longer about it.  How Texas goes will affect us all.

Four Stone Hearth #64 returns to the hands of people who know a bit about the topic, at Quiche Moraine.

Thanks for reading.  Remember to send your nominations for the next edition to Quiche Moraine, or to Martin.

Friends of Four Stone Hearth, sites that link to this edition (if you’ve linked and I missed it, please note it in the comments):

This entry was posted on Wednesday, March 25th, 2009 at 5:53 am and is filed under Anthropology, Archaeology, Evolution, History, Paleontology, Research, Science. You can follow any responses to this entry through the RSS 2.0 feed. You can leave a response, or trackback from your own site.

6 Responses to Four Stone Hearth #63: Bathing in the warm waters of ancient knowledge