Leisure Guy, in his leisure no doubt, has some time to look seriously at political criticism and its accuracy.  For example, recently he wondered about the claim that FDR didn’t do anything to help the U.S. out of the depression, and perhaps helped prolong it.  [I have corrected a minor error; he had FDR being inaugurated in January of 1933.  Franklin Delano Roosevelt was the last president to be inaugurated in March; the term was changed to start in January during his presidency.]

This graph is from an interesting post by Paul Krugman, but I was fascinated to see that you can tell when FDR took office. He was elected, as you know, at the end of 1932, and he took office in late January [March] of 1933. Can you find that spot on the graph? 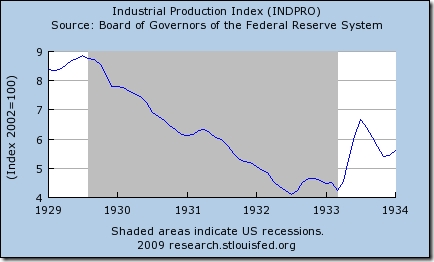 But of course, Right Wingers will tell you that FDR made the Depression worse. Some will even say that FDR started the Great Depression.

Leisure Guy didn’t include a link to Krugman’s post, drat it.  It doesn’t appear to be this one, though it covers some of the same territory.  Update: Oh, here it is:  “Partying like it’s 1931.”