Yes, malaria is still a plague; it’s not Rachel Carson’s fault, and your saying so probably kills kids

May 27’s Google Doodle honoring Rachel Carson brought out a lot of those people who have been duped by the anti-Rachel Carson hoaxers, people who are just sure their own biased views of science and the politics of medical care in the third world are right, and Carson, and the people who study those issues, are not.

So comes “The Federalist,” what appears to me to be a reactionary site, which yesterday got great readership for a story from Bethany Mandel.  Mandel tells a story of a child in Cambodia suffering from malaria.  The suffering is horrible and the child most likely died.  It’s a tragic story of poverty and lack of medical care in the third world.

Erroneously, Mandel up front blames the suffering all on Rachel Carson, in a carp about the Google Doodle.

Here was my quick response between bouts in the dentist’s chair yesterday [links added here]:

[Bethany Mandel wrote:] Using faulty science, Carson’s book argued that DDT could be deadly for birds and, thus, should be banned. Incredibly and tragically, her recommendations were taken at face value and soon the cheap and effective chemical was discontinued, not only in the United States but also abroad. Environmentalists were able to pressure USAID, foreign governments, and companies into using less effective means for their anti-malaria efforts. And so the world saw a rise in malaria deaths.

Start by not telling false tales.

1.  Carson presented a plethora of evidence that DDT kills birds.  This science was solid, and still is.

2.  Carson did not argue DDT should be banned.  She said it was necessary to fight disease, and consequently uses in the wild, requiring broadcast spraying, should be halted immediately.

3.  Scientific evidence against DDT mounted up quickly; under US law, two federal courts determined DDT was illegal under the Federal Insecticide, Fungicide, and Rodenticide Act; they stayed orders to ban the chemical pending hearings under a new procedure at the new Environmental Protection Agency.

EPA held hearings, adversary proceedings, for nine months. More than 30 DDT manufacturers were party to the hearings, presenting evidence totaling nearly 10,000 pages.  EPA’s administrative law judge ruled that, though DDT was deadly to insects, arachnids, fish, amphibians, reptiles, birds and mammals, the labeled uses proposed in a new label (substituted at the last moment) were legal under FIFRA — indoor use only, and only where public health was concerned.  This labeling would allow DDT to remain on sale, over the counter, with few penalties for anyone who did not follow the label.  EPA took the label requirements, and issued them as a regulation, which would prevent sales for any off-label uses.  Understanding that this would be a severe blow to U.S. DDT makers, EPA ordered U.S. manufacture could continue, for the export markets — fighting mosquitoes and malaria being the largest export use.

This ruling was appealed to federal courts twice; in both cases the courts ruled EPA had ample scientific evidence for its rule.  Under U.S. law, federal agencies may not set rules without supporting evidence.

4.  DDT was banned ONLY for agriculture use in the U.S.  It was banned in a few European nations.  [Addition, December 30, 2014: In fact, the U.S. action against DDT by EPA specifically called for DDT use in any fight against a vector borne disease, like malaria.]

5.  DDT has never been banned in Africa or Asia.

6.  USAID’s policy encouraged other nations to use U.S.-made DDT, consistent with federal policy to allow manufacture for export, for the benefit of U.S. business.

Fred Soper, super malaria fighter, whose ambitious campaign to erase malaria from the Earth had to be halted in 1965, before completion, when DDT abuse bred mosquitoes resistant and immune to DDT.

8.  Although WHO had been forced to end its malaria eradication operation in 1965, because DDT abuse had bred mosquitoes resistant to and immune to DDT, and though national and international campaigns against malaria largely languished without adequate government funding, malaria incidence and malaria deaths declined.  Especially after 1972, malaria continued a year-over-year decline with few exceptions.

Note that the WHO campaign ended in 1965 (officially abandoned by WHO officials in 1969), years before the U.S. ban on DDT.

Every statement about DDT in that paragraph of [Mandel’s] article, is wrong.

Most important, to the purpose of this essay, malaria did not increase.  Malaria infections decreased, and malaria deaths decreased.

I’m sure there are other parts of the story that are not false in every particular.  But this article tries to make a case against science, against environmental care — and the premise of the case is exactly wrong.  A good conclusion is unlikely to follow.

Mandel was hammered by the full force of the anti-Rachel Carson hoaxers.  I wonder how many children will die because people thought, “Hey, all we have to do is kill Rachel Carson to fix malaria,” and so went off searching for a gun and a bullet?

You are not among them, are you?

Update: This guy, a worshipper of the Breitbart, seems to be among those who’d rather rail against a good scientist than lift a finger to save a kid from malaria. If you go there, Dear Reader, be alert that he uses the Joe Stalin method of comment moderation:  Whatever you say, he won’t allow it to be posted.  Feel free to leave comments here, where we practice First Amendment-style ethics on discussion. 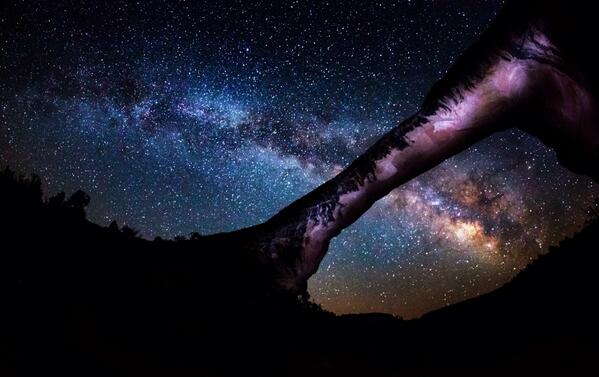 From the Department of Interior’s Twitter feed: Looking for a wow photo? This picture of the Milky Way over Natural Bridges Natl Monument should do the trick. pic.twitter.com/RfuDj7KXSA

Owachomo Bridge?  Photographer?  I wish Interior would put in all the details with their photos.